I could not believe what i saw with my eyes, it is obvious that whatsapp gave a quick notice of using whatsapp on blackberry and symbian devices.

It came to an extent in 2014 when blackberry became cheap in the market, and i thought of android, that android will come to rule smartphones.

Most persons were not actually happy because they would not like using their devices, without whatsapp on it, due to our discovery, we don't release the dream of blackberry anymore. Android users are going to be the smartphone rulers. 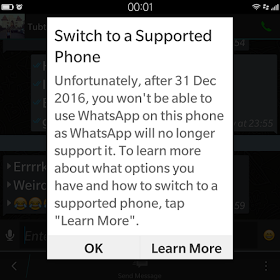 Due to some persons who have seen a message on whatsapp like this:


"Unfortunately, after 31 December, you won't be able to use WhatsApp on this phone as WhatsApp will no longer support it."


The Blackberry OS is now an out-dated phone, that no person will like to collect it, even as a present which is freely given.

Though it has been announced that ,the WhatsApp on Symbian and Blackberry devices willl no longer work, most persons took this news serious and decided to change their device, while the other persons thought it was a false story.

Please invite your friends and foes to see this news in order to known their next steps on what to do with their device.
Unknown 06:13:00 Comment